Kay was looking for a practical trade so that she could move to New Zealand. After a plumbing course at Sheffield College and work experience, she landed a good job. It suited her so well she stayed in Sheffield.

Why did you want to be a plumbing and heating engineer?

I’d been to New Zealand and loved it there so I was thinking about emigrating. You got lots of points for emigrating if you had a practical trade. I hate sitting down all the time and I didn’t like working in an office. I like fixing stuff, so that all appealed.

How did you become a plumber?

I was working for a bank, and I went travelling for a year to find out what I really wanted to do. I worked with a carpenter while I was in New Zealand and decided I wanted to do something practical, a trade. So I came back and wrote loads of letters to different people and firms. I got a place on a basic plumbing course at Sheffield College and a small firm took me on for work experience. When I got my gas qualifications I wanted to work for a firm that did things right and was lucky that a big company that was taking people with qualifications. 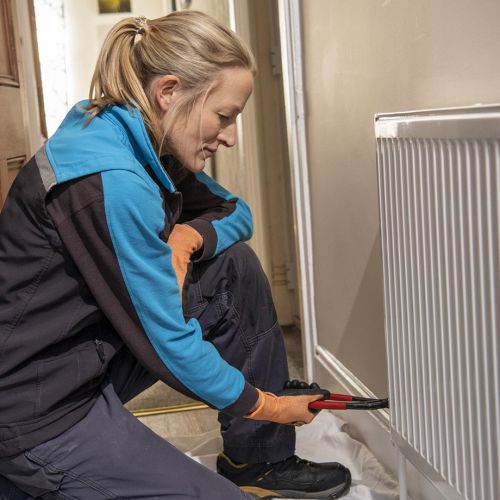 The best thing is helping people: going into an old lady’s house when she’s got no heating in the middle of winter and making her warm again. It’s a nice feeling, the job satisfaction and seeing the results of your work and how it benefits someone.

I was inspired to make more of my life by some of the young people I worked with at the bank. They had a plan and knew what they were doing and wanted to do. At that time I was drifting along and they inspired me to make the decision to change things and be happier.

Once I started working as a plumber I met other local tradeswomen at the Women’s Construction Centre who really inspired me – like Ros who was a car mechanic and Mandy the electrician. When you know where to look, there are lots of inspiring women in Sheffield!

Have you encountered sexism and how do you deal with it?

In the early days, it was more a feeling than anything specific. When I was working at a small local plumbing firm some guys were really against me being there at all, and a few people suggested that I should be doing the washing up rather than plumbing, and said things like, “While you’re here, could you do the laundry”! It’s better today and not nearly so bad. I still encounter people who say, “Have you come on your own?” when I turn up to fix their boiler, because they are looking around for the man!

I was changing a cylinder for an old guy and he said that his neighbours had the builders in, so if I needed a hand he could get them to help. He wasn’t being nasty or anything, he just didn’t understand that I can do the job!

I deal with it by saying politely I’m fine, I can manage thank you and I’ll ask if I need to. But I know it is mainly older guys who aren’t used to a women doing this job and are trying to help.  I try to change their minds by doing a really good job.

Most of my customers are really surprised to see a female plumber when I come to the door. But they are positive and say how nice it is. It’s a bit relentless and wearing at times, but it’s something I have to accept. 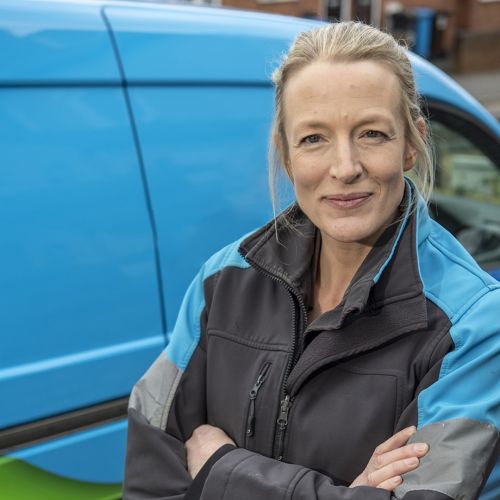 What did your friends think about you becoming a plumber?

Most of my friends tried to put me off! They didn’t think that I would do it because it was so different to the other things I’d done and they didn’t believe I would stick with it. But anyone who knows me well enough will know that telling me I can’t do something is guaranteed to make me do it more!

What do you do in your spare time?

I am mostly taken up with my daughter who is two and a half. Apart from that I love being outdoors: windsurfing, sailing and other water sports. We converted a campervan last year so also travelling and getting out on holiday. I love music too and get out to see bands when I can too

What would you like to be doing in 10 years’ time?

I may still be with the firm I work for now because working part time for them suits me very well at the moment bringing up my daughter. I do sometimes think about working for myself.

Advice to girls thinking of becoming a plumber?

Don’t be afraid of taking a risk. If you don’t take a risk, you won’t get anywhere. Plumbing is not for everyone but it can be really fun! And it’s a well-paid, secure job – people are always going to need plumbers.

Back to Yes We Can Posters